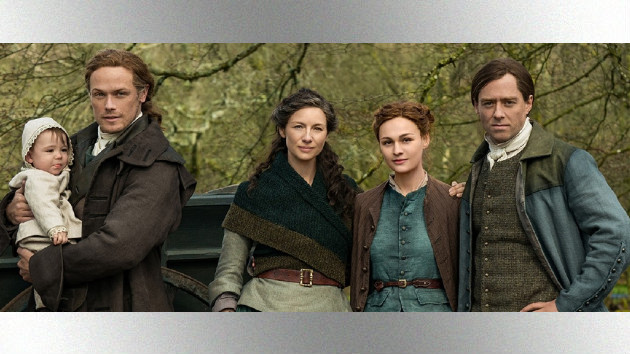 STARZ(NEW YORK) — On its app, STARZ has released the first episode of the fifth season of its romantic, time-spanning show Outlander, which officially debuts Sunday night.

Based on the novels by Diana Gabaldon, the series quickly gathered a rabid fan following that even five seasons on, still stuns two of its stars, Sam Heughan and Caitriona Balfe.

Heughan in particular has set hearts aflutter, thanks to his character Jamie Fraser, a Scottish warlord who falls for Balfe’s time-transported WWII-era nurse, Claire Fraser.

Not only has Heughan inspired the hashtag KiltDaddy, but a recent trip to Good Morning America in Times Square proved his following was bigger than a particular boy band.

“Backstreet Boys were out there and there was cheering, but then Sam Heughan walked out, and I swear there was louder cheering,” a clearly tickled Balfe says.

On a more serious note, the pair is gratified by the show’s fan base. “It’s you know, six years we’ve been doing it now and it doesn’t seem to be getting smaller,” Sam says.

Balfe adds, “And I think we’re finding new audiences all the time, which is just amazing. I mean, you know, to have season five come out and it feels just as exciting as when season one did is a really special thing.”

The first Outlander season five episode hinges on the wedding of the pair’s daughter, Brianna. They joked shooting it was like a real wedding.

“Yeah, I think there was some alcohol consumed by certain members of the cast,” Balfe added.

Sam continued, “It went on a very long time. Everyone got very hungry. And the catering wasn’t up to much…”

“So like a good Scottish wedding,” Balfe added, laughing.