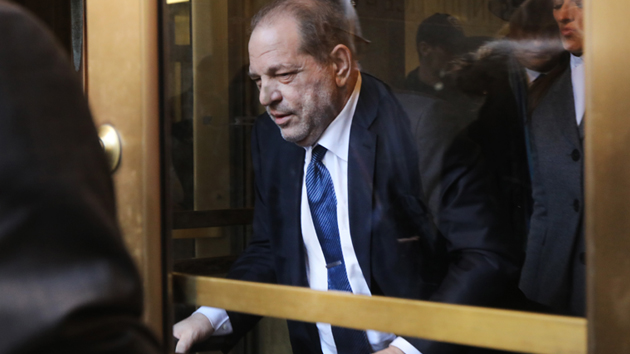 Harvey Weinstein leaves court Friday afternoon; Spencer Platt/Getty Images(NEW YORK) — Jurors in the Harvey Weinstein sexual assault case ended the day’s deliberations Friday at 3:00 p.m. ET without reaching a verdict.  Before doing so, however, the jurors asked the judge about a partial verdict.

“We the jury request to understand if we can be hung on [counts] 1 and or 3 and unanimous on the other charges,” they said Friday afternoon.

Counts one and three are the two top charges of predatory sexual assault.

Prosecutors argued that the jury should be instructed to keep deliberating, saying they would not be willing to accept a partial verdict “at this juncture.” Manhattan Supreme Court Judge James Burke sent the jury back to deliberate.

Earlier Friday, the jury heard a readback of actress Annabella Sciorra’s full cross-examination testimony — part of one of the most powerful and affecting accounts of the trial.

During a bathroom break about halfway through Annabella Sciorra’s full, two-hour cross examination and redirect follows, the jury sent the judge a new note, saying the readbacks could be discontinued — they’d heard all they needed.

The jury also sent a note to Judge Burke on Thursday, requesting the court read to them the cross-examination and everything after Sciorra’s testimony.

Sciorra described in wrenching detail in the courtroom on Jan. 23 about the night nearly 30 years ago when she alleges Weinstein violently raped her at her apartment.

Her allegation is not one of those being considered as a charge in this trial, but rather was offered in support of two predatory sexual assault charges against Weinstein — which require the state to prove that Weinstein attacked at least two women, in this case Sciorra and one of the two accusers. It’s part of prosecutors’ larger efforts to demonstrate a pattern of sexual predation on Weinstein’s part.

Weinstein has been charged with five counts of sexual assault related-crimes including predatory sexual assault and rape in the first degree, stemming from two women’s allegations. He has pleaded not guilty to all charges and claims any sexual encounters were consensual.

Deliberations are scheduled to resume Monday.