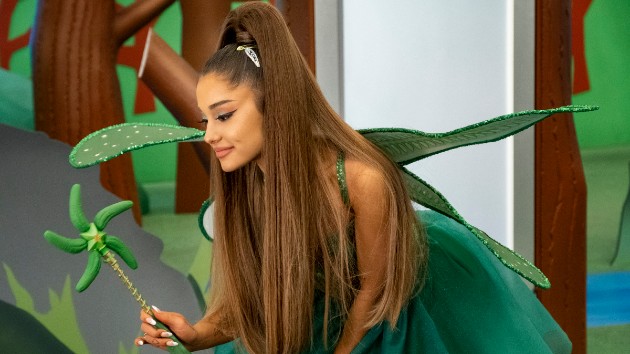 Beth Corey Dubber/SHOWTIMEAriana Grande got the chance to act alongside her all-time idol Jim Carrey Sunday night, as she made a guest appearance on his Showtime series, Kidding.  If you missed it, you can now watch a clip online.

In the show, Ariana played Piccola the Pickle Fairy, a character on the children’s show that Carrey’s character, Mr. Pickles, created.  Dressed in green and sporting a wand and pickle-shaped wings, Ari, Carrey and co-star Catherine Keener sing a song called “Stick Together,” about how it’s easier to fix things if we all work together.  In another scene, Ariana sings a song about hope along with Carrey and the puppets on the show.

While filming the episode last year, Ariana wrote on Instagram that working with Carrey was “the most special experience of my life” of her life, and added, “Nothing is crazier than getting to work with and spend time with someone whom you’ve idolized and adored since before you could speak.”

She continued, “Actually, what’s even crazier is discovering that person to be more special and warm and generous in person than you ever could’ve imagined.”

Ariana must have felt right at home in a children’s TV scenario, since she starred on the Nickelodeon shows Victorious and Sam & Cat.