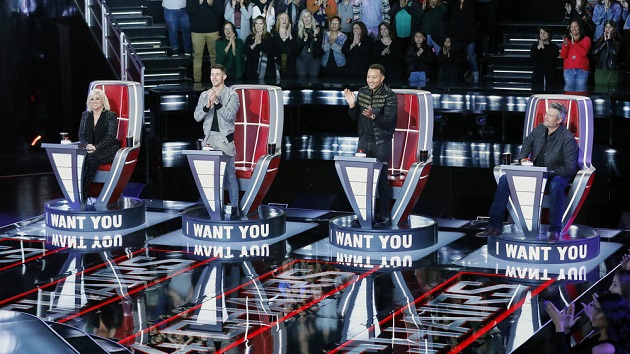 It may be a new season of The Voice, but there’s a brand new face sitting in one of the judge’s chair this year — Nick Jonas of The Jonas Brothers. The young singer proved to be a formidable opponent when battling it out with the other judges over competitors, too.

Jonas knew how to keep his fellow judges guessing from the second he arrived on the set — via parachute.  That wasn’t all, though.  He also proceeded to do a series of costume changes before Kelly Clarkson, Blake Shelton, and John Legend right after he landed.

“Is this a Magic Mike moment?”  Kelly yelled in disbelief as Jonas ripped off his wingsuit to reveal a black tuxedo underneath.  He then tore off that outfit to reveal underneath a much more casual gray suit.

Memorable introductions aside, Jonas didn’t make it easy for the other judges to woo over competitors that he wanted on his team.

First up was Todd Tilghman, 41, of Mississippi.  The father of eight created the season’s first four-way chair turn during his soulful rendition of Bob Seger & The Silver Bullet Band‘s “We’ve Got Tonight.”

While Kelly tried winning Tilghman over by approaching him as a fellow parent as Jonas turned on the charm and spoke to him husband to husband — it was Blake who snagged the first competitor of the night by connecting with Tilghman on a personal level.

Next to take the stage was 27-year-old Nelson Cade III, a full time musician who once performed with the legendary Stevie Wonder. It doesn’t take long for his raspy, bluegrass voice to win over John, Kelly, and Nick with his cover of Stevie Ray Vaughan‘s “Pride And Joy.”

Unfortunately for Nick, he realizes that he was blocked by Legend, meaning no matter what pitch he had up his sleeve to win Cade over, it was fruitless.  To turn insult to injury, the “All Of Me” singer then bragged about it by mocking he the words “star” and “wow” that Nick jotted down during the audition.  Playing dirty paid off for John, who ended with a three-punch combo by casually sharing that Wonder also performed at his wedding to Chrissy Teigen.

Now with the judges warmed up, it’s game on when Tate Brusa, 16, takes the stage. Brusa’s chances of making it on a team looked grim, that is until he hits an edgy note towards the end of his audition convincing Nick to spin around. But he’s not alone, Shelton follows shortly after, if for nothing than to give the Jo’ Bro a hard time.

Nick hops on stage with Brusa and gives him an impromptu singing lesson to prove just how good of a coach he can be which triggers Shelton to play dirty by bringing out some reinforcement — an adorable white-furred puppy.

“If you don’t choose me as your coach, this puppy’s gonna go straight back to the animal shelter,” he threatened.

Despite the taunt, the threat fails to sway Brusa and the teenage crooner picks Nick, making him the first contestant on his team.

Seven more hopefuls take the stage including rocker Todd Michael Hall who makes it onto Blake’s team but it’s “old soul” Joanna Serenko who closes out the show with a four-chair-turn.

The 18-year-old from St. Louis wooed with her jazzy, slowed-down version of “All My Loving” by The Beatles and just as she’s deciding who’s team to go to, Nick decides to lay it all on the line.

Bearing it all he pleads, “I’m gonna fight for you today. I know I’m not the logical choice but I have something to prove,” which works.

The other singers of the night were Darious Lyles who went over to Team Legend, Todd Michael Hall to Team Blake –and two for Team Kelly, Megan Danielle and Tayler Green.

The Voice returns to NBC Tuesday at 8 p.m. ET.