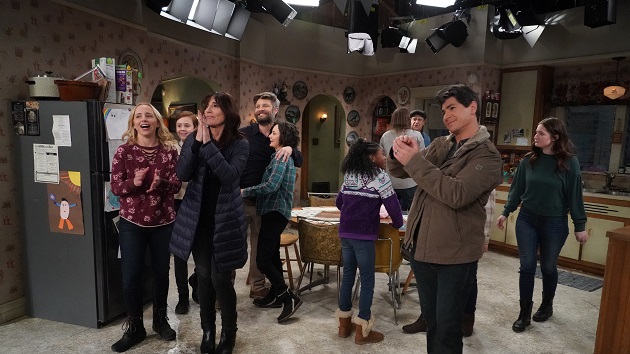 ABC/Eric McCandless(NEW YORK) — “Let’s get political” was the overarching theme of The Conners live show that aired Tuesday night on ABC.

The episode, which was performed live twice for different time zones, aired at the same time as the New Hampshire primaries. This allowed the show to incorporate live updates of the primary and also insert some not-so-subtle jabs at the current Democratic candidates during the half-hour long sitcom.

The story line followed Darlene’s children, Mark (Ames McNamara) and Harris (Emma Kenney), who are watching news reports on the primary. Mark has been assigned a school report on it, while Harris plays the cynical observer who considers the influence of money in politics a blockade to change.

As results were pouring in, McNamara calmly broke the news that entrepreneur Andrew Yang had pulled out of the race while joking that previews for The Bachelor were blocking the bottom half of the screen.

Other family members circulate through the room and spout off their opinions, such as proclaiming that the results would be “a lot more fair” if all the candidates got into “a rap battle at the local club.”

In addition to the political updates, The Connors aired a live commercial during the broadcast which took a moment to encourage people to go out and vote.

“You can’t make people feel stupid about their choice unless you vote,” Darlene quipped.