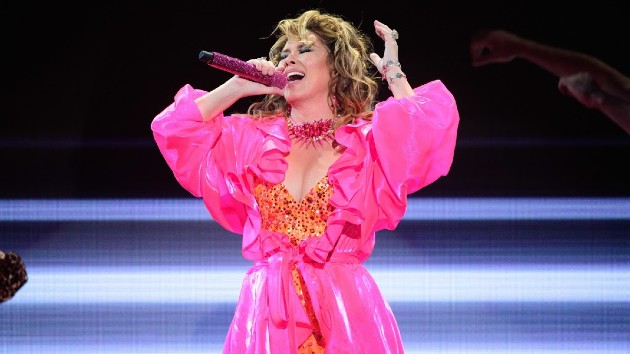 ABC/Image Group LAHalsey‘s new video for “You Should Be Sad” features the singer dressing up in two looks that were designed as homages to two classic Shania Twain videos. Well, color Shania impressed.

In the clip, we see Halsey wearing a black sheath with her hair up, as Shania did in the “Man! I Feel Like a Woman” video.  We also see her wearing a hooded leopard-skin outfit, like she does in the “That Don’t Impress Me Much” video.

“Xtina, Gaga, Carrie [Underwood], and of course Shania, this was one loaded with nods to bada** idols of mine,” Halsey tweeted about the clip.

In a statement to ABC Audio, Shania says that she’s “flattered to be a ‘badass idol’ for a woman like Halsey – she sure takes Shania to another level. Let’s go, girls!”

Shania also retweeted the video and wrote, “Oh yes! Love it!! Flattered to be one of your bada** idols @halsey.”

Halsey also tweeted that “You Should Be Sad” was inspired by country music, and the fact that she’d spent a lot of time in Nashville.  The song appears on her new album Manic, out January 17.