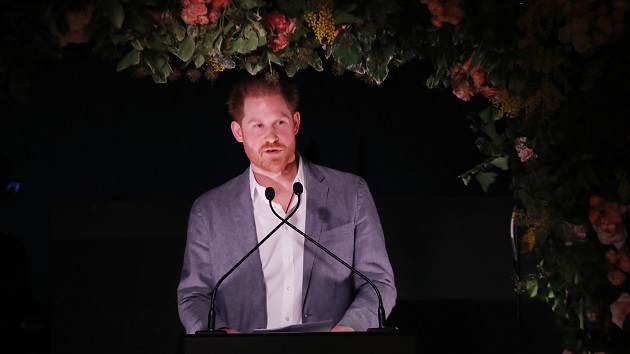 Chris Jackson/Getty Images for Sentebale(LONDON) — Prince Harry broke his silence about his and Meghan Markle’s decision to leave the royal family.

On the couple’s official Instagram, they posted a video of Harry’s speech during Sunday’s dinner for “supporters of Sentebale in London.”  Sentebale, a charity that was formed in 2006 in memory of Princess Diana, supports HIV-positive children in southern Africa.

Harry opened his speech by addressing the elephant in the room, “Before I begin, I must say that I can only imagine what you may have heard or, perhaps, read over the past few weeks,” which elicited muted chuckles from the audience.

Wanting those in attendance to “hear the truth from me,” and “not as a prince, or a duke, but as Harry,” the 35-year-old praised his homeland and the audience for welcoming Markle “with open arms,” before explaining that “it brings me great sadness that it has come to this. The decision that I have made for my wife and I to step back is not one I made lightly.”

The former-royal went on to reveal their decision was a product of “so many months of talks, after so many years of challenges” before admitting, “and I know I haven’t always gotten it right, but as far as this goes…there really was no other option.”

After reiterating his commitments to his country and family, Harry revealed that he hopes that giving up the role he was born into will lead to “a more peaceful life.”

“The media is a powerful force and my hope is one day our collective support for each other can be more powerful, because this is so much bigger than just us,” Harry noted as he went on to express his profound gratitude to his country as he takes this “leap of faith.”