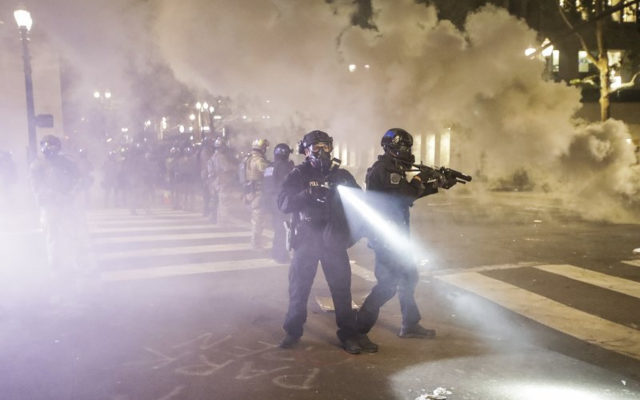 PORTLAND, Ore. (AP) — The Oregon governor’s office has indicated that it would begin to draw down the presence of federal agents sent to quell two months of chaotic protests in Portland if the state stepped up its own enforcement, a senior White House official said Tuesday.

The official stressed to The Associated Press that the talks with the office of Democratic Gov. Kate Brown are in the early stages and there is no agreement. The official was not authorized to publicly discuss private conversations and spoke on the condition of anonymity.

Our local Oregon State Police officers will be downtown to protect Oregonians' right to free speech and keep the peace. Let's center the Black Lives Matter movement's demands for racial justice and police accountability. It's time for bold action to reform police practices.

“The federal occupation of our community has brought a new kind of fear to our streets. Federal agents nearly killed a demonstrator, and their presence has led to increased violence and vandalism in our downtown core. The daily coverage of their actions has distracted our community from the Black voices at the center of this movement, and the urgent work of reform.

I appreciate Governor Brown’s leadership in this discussion and her willingness to step in with State resources. The Governor and I agree: Oregon resources, expertise, and values are sufficient to manage Oregon issues.

The Oregon State Police, Multnomah County Sheriff’s Office, and Portland Police Bureau will continue working together to keep Portlanders safe, and the Governor and I have given clear direction: we expect that they will continue engaging only if there is violent criminal activity.

For nearly two months, many thousands of Portlanders have committed to conversation and action centered on police and criminal justice system reform in our community. Local and State leaders have taken meaningful steps. And we are poised to do more.

Today, Council will consider referring a ballot measure to fundamentally reimagine police accountability. The City Council has redirected millions of dollars from the Police Bureau’s budget, and is pressing forward with updates to bureau policies and training.

We are beginning to work with incoming District Attorney Mike Schmidt to reform the legal arm of the criminal justice system. We are advocating to State and Federal legislators for changes in the law.

And I am developing a community reinvestment proposal that I hope my colleagues will support when we discuss the City budget this fall.

The work of reform deserves our community’s full and complete attention, and I know that Portlanders will stay engaged. I’m proud of this community, and excited for the work ahead.”

Did Britney Throw Shade At Her Sister’s Memoir?

Reporter Does His Live Shot Skateboarding The Whole Time

“Hello” again: Adele returns to that same empty house for her new “Easy on Me” video