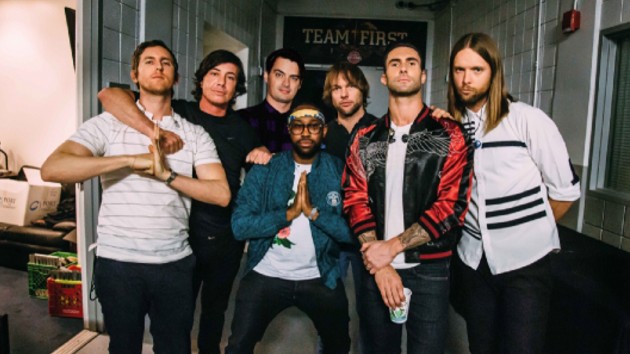 The emotional song about paying tribute to lost loved ones just topped Billboard’s Pop Songs chart, which measures radio airplay.  It’s the group’s 11th number one on that chart, tying them with Katy Perry and Rihanna for the most leaders since the chart debuted back in 1982.

Adam Levine and company’s stretch of number ones on the chart dates from 2004 with “This Love,” through 2018’s “Girls Like You,” which was their 10th.  Now, “Memories” has finally allowed them to catch up to Katy and Rihanna.

Over the weekend, Maroon 5, who headlined last year’s Super Bowl halftime show, performed at the Bud Light Super Bowl Music Fest in Miami.  Billboard reports that before performing “Memories,” Adam Levine held up a Kobe Bryant #24 jersey and said, “I don’t know if I’ll make it through this one with all my emotions intact…Needless to say I think we know who this song is dedicated to.”

Referring to Maroon 5’s controversial halftime performance last year, Adam told the crowd, “I’m just happy we can kind of kick back and hang out down the street and have fun, but still be somewhat away from the madness.”