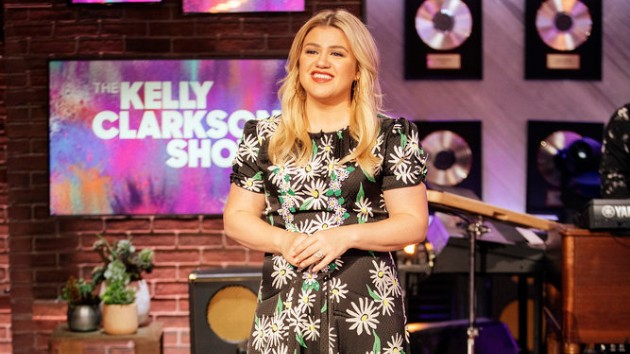 Weiss Eubanks/NBCUniversalTalk show reunions are always fun, especially when they involve celebrities who are both way, way more famous now than they were when they first encountered each other.  Case in point: On The Kelly Clarkson Show Tuesday, Kelly reunited with Step Up star Jenna Dewan, who she first met in 2002, under unusual circumstances.

“One of my first things ever to do after Idol…you were back-up dancing and I was doing ‘Miss Independent’…we were in a Wal-Mart parking lot!” Kelly reminisced.

Specifically, Kelly, the newly crowned American Idol champ, was doing a promotional appearance in the parking lot, singing her first post-Idol single, while a then-unknown Jenna worked as her back up dancer.  There’s even a photo of the event, which you can see on Instagram.

“I signed [autographs] till 2:00 a.m. and like, we were just out there and she was dancing,” Kelly recalled. “And I was like, ‘God, you’re beautiful and can I dance like that maybe one day?’”

She laughed, “No. Turns out I just sing well, sometimes!”

But Kelly then told the pregnant dancer and actress why their encounter meant so much to her at the time.

“I was so excited ’cause I had no friends,” Kelly admitted. “At home I did. But I was working in L.A., I didn’t know anyone. And so it was just nice to, like, see a Texas girl and just so nice and you were kind. And I really needed somebody to be kind in that moment. And you were. And so thank you so much”

“Aww, Kelly, that’s so sweet!” gushed Jenna, who’s expecting her first child with her current boyfriend Steve Kazee.  She also shares a daughter with her ex-husband, Channing Tatum.   Kelly predicted that Jenna is having a boy.

Throwback! True story: the first time Kelly met @JennaDewan she was her backup dancer for a performance in a Walmart parking lot 😱 See their reunion today on the #KellyClarksonShow! pic.twitter.com/SQAIfRwT7v