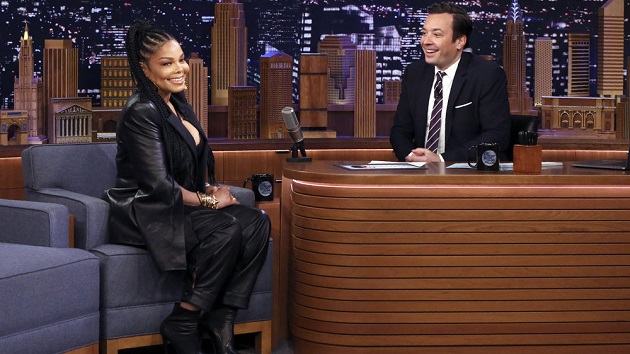 Andrew Lipovsky/NBCJanet Jackson announced on Monday morning to expect her new album Black Diamond and world tour kicking off later this year.  That night, she dropped by The Tonight Show to and hyped her upcoming work while reminiscing about her breakthrough album, Control.

The record, released in 1986, featured what has become one of Janet’s signature songs, “Nasty.”  The single was written in response to catcalling, which she and a friend were subjected while living in a Minneapolis hotel.

“We were…walking out of the hotel there were like, five or six older guys…standing up against the wall, and they just basically started messing with us,” she recalls.  “And I didn’t like it very much and…I was actually pretty upset…And it turned into the song ‘Nasty.’”

Jackson, 53, also fielded a question from Quest Love, the drummer for Fallon’s house band The Roots, who wanted to know why she was regularly seen with a key dangling from her ear.

“I never kept a key chain,” she explained. “We had so many animals growing up…[and]…it was my job to feed them [and] to clean the cages.”

“So all through school I wore hooped earrings…And I would keep the key on my earring so I wouldn’t lose it,” she continued.

Jackson launches her Black Diamond World Tour June 24 in Miami, Florida, accompanied by an album of the same name — a title that has a special significance.

“Black Diamond…it’s the toughest of the stones of the diamonds to cut,” she says.  “And I heard that immediately as hard to hurt, to destroy.  And in my recent years I’ve come to realize that I’m incredibly strong.”

Black Diamond will be the follow-up to Janet’s most recent studio album, Unbreakable, which came out in 2015.