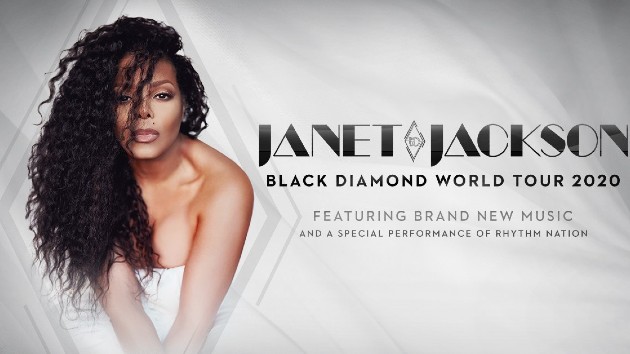 Live Nation EntertainmentFollowing a year that saw her launch her first Las Vegas residency, Janet Jackson is now bringing her music directly to her fans.

The iconic performer has announced her Black Diamond World Tour, which will will kick off June 24 in Miami, FL.  Tickets go on sale to the general public on February 13 via LiveNation.com.

The tour will feature an all-new production, as well as music from Janet’s upcoming new album, also called Black Diamond, due out later this year.  Of course, she’ll also perform her hits, as well as a special set dedicated to her landmark album Rhythm Nation 1814, which last year marked its 30th anniversary.

The North American leg of the Black Diamond World Tour will wrap up August 23 in Tacoma, Washington.  Dates for the rest of the world will be announced soon.

Black Diamond will be the follow-up to Janet’s most recent studio album, Unbreakable, which came out in 2015.

Janet’s Metamorphosis Vegas show grossed just under $13 million over 18 dates, making it a box office success.  No word on whether she’ll return to Sin City for more dates.