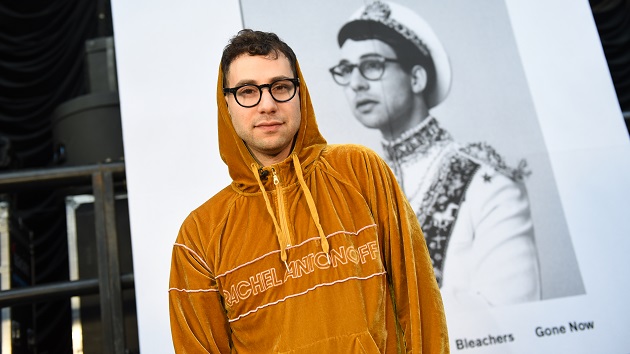 When it comes to naming some of Hollywood’s sexiest singers, Bleachers frontman Jack Atonoff might not be the first person that comes to mind.

However, the 35-year-old hilariously showed off that he can turn up the heat when the occasion is just right.

It all started Tuesday on Twitter when the former fun. singer warned his followers, “gotta some bizarre pics will post them soon they’re fun.”

At first, the Instagram photo fest reflected Antonoff’s adventures during the Grammys, from meeting friends to sitting in the audience and watching artists like Lil Nas X perform.

But it was only a matter of time before the “We Are Young” singer fulfilled his promise of bringing the bizarre late Tuesday.

Antonoff, who produced Taylor Swift‘s Lover, posted a photo of himself wearing just a pair of tight black briefs while he’s sprawled seductively out on a bed, surrounded by three open cartons of Mexican takeout.

Antonoff is also eating what appears to be an arepa and even has his pinky finger up to show off that he’s not only showing off his sexy side, but his classy side as well.

“Sunday in iphone,” captions the two-time Grammy nominee in a photo that probably needed more context.

However, Antonoff did post a followup photo on his Instagram stories, in which he is passed out on the now-empty bed.

Earlier this month, the singer confirmed that he is working on a new Bleachers album, which is due out later this year.