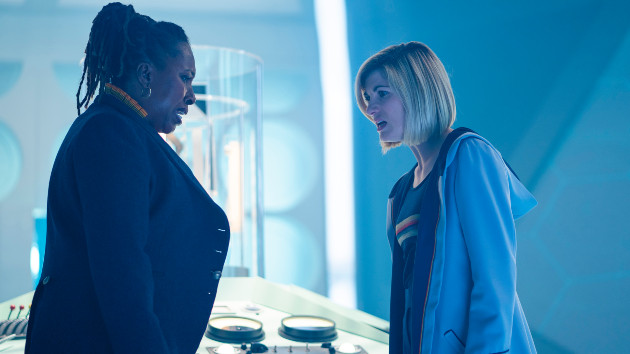 L-R Martin, Whitaker — BBC America/James Pardon (LONDON) — (SPOILER ALERT) Doctor Who, one of the longest-running television shows of all time, has made a historical casting decision.

If that sounds confusing, well, it’s meant to be.

Doctor Who follows the interstellar adventures of “The Doctor,” a time-traveling alien who is able to regenerate into a new form. Whittaker, the first woman to play the role, is officially the thirteenth Doctor. Since the show was rebooted in 2005, the character has also been played by Christopher Eccleston, Matt Smith, David Tennant, and Peter Capaldi.
In Sunday’s episode, Whittaker’s Doctor meets Martin’s Ruth, a tour guide who is later revealed to be The Doctor as well. More specifically, she’s a different incarnation of the character, and as we learn, she’s part of the current Doctor’s past. However, Whittaker’s Doctor has no memory of ever being that Doctor, whose personality and tactics are vastly different from her own. In fact, Martin’s Doctor can barely stand Whittaker’s Doctor. Whittaker’s Doctor — who’d previously been warned by her old frenemy The Master that everything she knows is wrong — then realizes that Martin’s Doctor is part of a mysterious alternate timeline.
And, as if she doesn’t have enough to worry about, Sunday’s episode also marked the return of a fan-favorite character — John Barrowman’s Captain Jack Harkness — who warns her that “the Lone Cyberman” is coming for her.
The official Doctor Who took to Twitter after the show’s airing and, while posting a GIF of the big reveal, asked fans, “Who else was shook at THIS moment?!”  Fan reaction was, obviously, intense.

Doctor Who airs on BBC America Sundays at 8 p.m. ET.