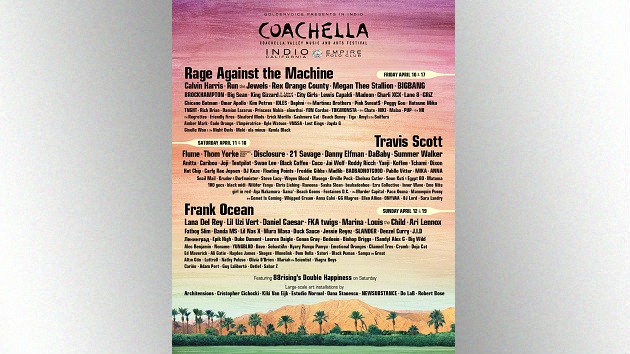 2020 Coachella lineup; GoldenvoiceThe wait for the official Coachella 2020 lineup is finally over.  The famed music festival, which takes place on the weekends of April 12-12 and 17-19 in Indio, California, released its list of confirmed acts late Thursday night.

It was also revealed that Weekend 1 has already been sold out.

This year’s esteemed headliners will be Rage Against the Machine, Travis Scott, and Frank Ocean.  While all three acts were either confirmed or rumored to be a part of Coachella, the festival will mark the first time since 2011 of RATM playing together.

The political rap-rock band is scheduled to perform both weekends of the festival, as are Scott and Ocean.

Also taking the Coachella stages this year will be Calvin Harris, Lana Del Rey, Thom Yorke, Megan Thee Stallion, FKA twigs, Lewis Capaldi, Charli XCX, Lil Nas X and many others.  You can check out the complete roster of performers at the Coachella website.

Coachella trolled fans in the hours leading up to the lineup announcement by retweeting years’ old comments begging for certain performers, such as one fan’s 2015 request to bring back FKA twigs.  “Sorry just seeing this,” The festival casually remarked just an hour before officially revealing the 2020 lineup.

The account teased other acts, such as Fatboy Slim, Caribou, Denzel Curry, and Charlie Chu, by retweeting three to 12-year-old Coachella-related threads.

It’s still unknown if Coachella will be live streamed for free this year, as it was the first weekend last year.

Presale tickets for Weekend 2 go on sale this Monday, January 6 at 12 p.m. PT via Coachella.com.  As usual, there’ll be the usual variety of ticket options and price levels.