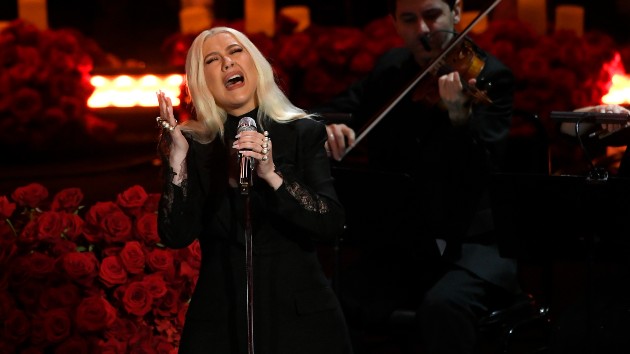 Kevork Djansezian/Getty ImagesChristina Aguilera, Alicia Keys and Beyoncé were all on hand Monday afternoon to salute late basketball legend Kobe Bryant and his teenage daughter, Gianna, at their Celebration of Life ceremony at the Staples Center and L.A.  They, along with seven others, perished in a helicopter crash on January 26.

Christina performed “Ave Maria” in Italian while backed by a string section, while Alicia performed Beethoven‘s “Moonlight Sonata” on the piano.  That performance followed a speech by Lakers general manager Rob Pelinka, who explained that Kobe had taught himself how to play the classical piece by ear to express his love for his wife, Vanessa.

Beyoncé, meanwhile, sang her songs “XO” and “Halo.”  After she began “XO,” she stopped and told the crowd, “I’m here because I love Kobe, and this was one of his favorite songs. So I want to start that over, but I want us to do it all together. I want us to sing it so loud that we hear the love.”

As Billboard notes, Beyoncé, evidently mindful of the manner in which Kobe and Gianna died, changed the lyric in “XO” that goes “And I’m crashing into you” to “And I’m laughing into you.”