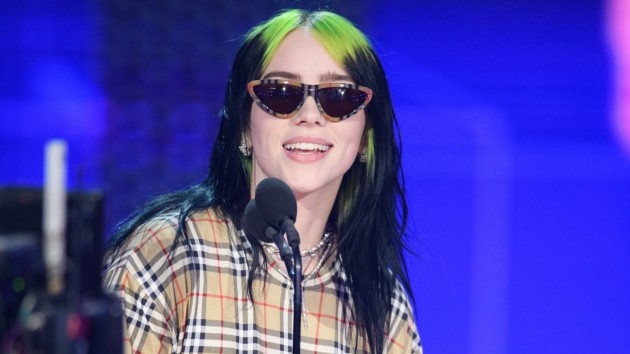 ABC/Image Group LA If 2019 was a big year for Billie Eilish, 2020 promises to be just as big: She’s got six Grammy nominations, she’s recording the new James Bond movie theme, she’s working on a new album, and she’s got a documentary in the works.  But Billie says it’s the latter project that’s really causing her anxiety.

Over the weekend on the red carpet of a concert event, Billie said she thinks the Apple TV+ documentary will debut sometime this year, but adds, “I’ve seen no part of it. I’m terrified. I’m freaked out. They’ve been filming since July of 2018…Who has that much footage of them that they’ve never seen? I’m terrified.”

Regarding the follow-up to her record-breaking debut album WHEN WE ALL FALL ASLEEP, WHERE DO WE GO?, Billie revealed that we shouldn’t expect it this year, though she’ll be working on it this year.

As for her debut Grammys performance this weekend, the chart-topping star downplayed the honor, saying, “Don’t get your hopes up. I mean, it’ll be me, but it’s not that much. It’s just me.”

You can see if that’s true by tuning into the Grammy Awards Sunday night starting at 8 p.m. ET on CBS.