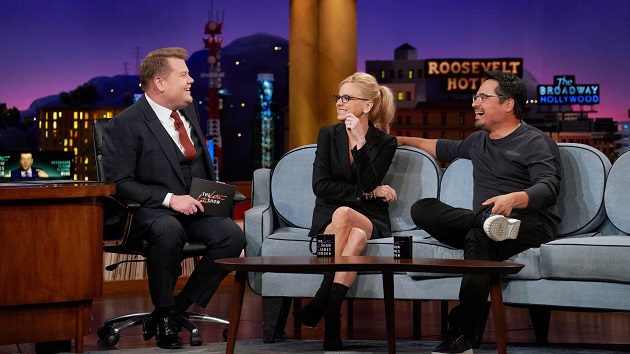 As the two sat down to chat, Corden made notice of a new sparkly piece of jewelry that the actress was wearing on her ring finger.

“This was not here last time you were on the show,” he said about the “unbelievable ring” with a large, cushion cut stone.

The late night talk show host even joked that she was marrying Mark Zuckerberg, but he’s already taken. Faris is actually engaged to cinematographer Michael Barrett, who she’s been with since 2017. The two even worked together on the 2018 film Overboard.

Things took an unexpected turn though after Corden congratulated Faris on her engagement.

“Thank you,” she said with a big smile, then asked, “Do you officiate weddings?”

Faris clarified that Corden would have to audition for the role which she hopes will be filled by someone “humorous,” who can bring a “heartfelt sentiment,” and “doesn’t talk too much about themselves.”

That’s when Corden took himself out of the running.

“That’s a problem,” he quipped. “I really strike out on all three of those.”