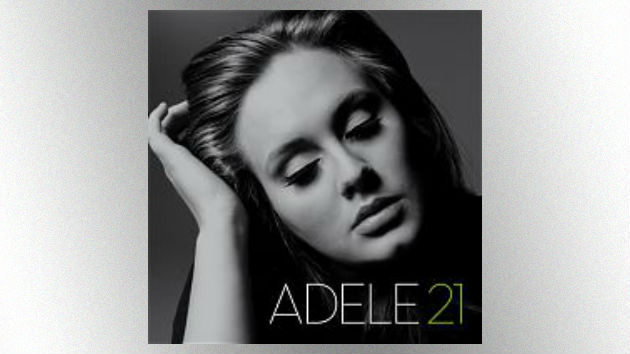 Columbia/XLIt’s set many chart records since it was released in 2011, but Adele‘s 21 has just crossed yet another milestone.

21 is currently #150 on the Billboard 200 album chart, and has now spent 450 consecutive weeks on that chart.  According to Forbes, it’s the first album by a female artist to remain on the chart for that length of time.   That’s 450 weeks in total: They weren’t consecutive.

As Forbes notes, there have only been nine other albums that have reached 450 total weeks or more on the Billboard 200, but they were all by men, or male groups — including Journey‘s Greatest Hits, Nirvana’s Nevermind, the cast recording of My Fair Lady, Bob Marley and the Wailers‘ Legend, Metallica‘s self titled 1991 album, and Bruno Mars’ debut, Doo-Wops and Hooligans.  Not all of those were consecutive either.

21 also spent 24 non-consecutive weeks at number one and spun off three massive hits: “Rolling in the Deep,” “Someone Like You” and “Set Fire to the Rain.”

However, 21 has a ways to go before it approaches the all-time record. The longest-running album in the history of the Billboard 200 album chart is Pink Floyd‘s Dark Side of the Moon, which racked up 949 non-consecutive weeks overall.