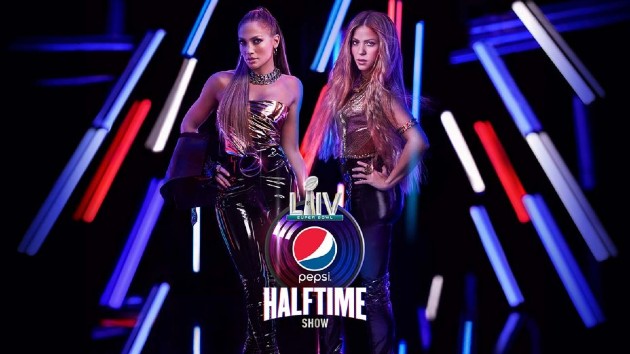 The trend of having current big-name music stars perform during halftime only dates back to 1991, when New Kids on the Block performed. Before that, halftime was marching bands, older stars like Chubby Checker, or the G-rated vocal troupe Up with People.

Since then, only one Latin artist has ever headlined: Gloria Estefan, who did it twice, in 1992 and 1999.  But Jennifer Lopez and Shakira‘s extravaganza this Sunday night in Miami will mark the first time two Latin artists together have had top billing on the show.  In addition, a Latin woman, Demi Lovato, will sing the national anthem.  Special guests are also expected to pop up.

As Billboard notes, this is also the first year the halftime show is being produced by JAY-Z’s company, Roc Nation, along with NBC and Pepsi.  The rap mogul partnered with the NFL last summer in a multiyear deal to consult on entertainment.  According to Billboard, that’s one reason Jennifer and Shakira were chosen: They wanted to make sure that, going forward, the Super Bowl will “spotlight the culture of the city that hosts it.”

You may recall that last year, one of the complaints about the selection of Maroon 5 as the halftime headliner was that they had no connection to Atlanta, a city with a rich history of hip-hop.  While hip-hop stars joined Adam Levine and company onstage, they didn’t receive top billing.

But of course, the halftime show has been plagued by controversy of one form or another since 2004’s “Nipplegate” fiasco with Justin Timberlake and Janet Jackson.  In the years after that, the NFL turned to “safer” classic rock artists such as The Rolling Stones, Bruce Springsteen and Tom Petty as halftime performers. Pop stars returned to the halftime show in 2011 with the Black Eyed Peas‘ performance.

Everything since has mostly been been O.K., with a few exceptions.  During Madonna‘s 2012 performance, one of her guests, rapper M.I.A., flipped off the crowd. And in 2016, Beyoncé was criticized for featuring back-up dancers dressed in outfits reminiscent of the Black Panther political party of the 1960s.

Last year’s show was possibly the most controversial since 2004, though.  Many fans felt that, due to the NFL’s alleged treatment of Colin Kaepernick and other players who’ve knelt during the national anthem to protest police brutality and racial inequality, Maroon 5, Travis Scott and Big Boi should have declined to perform.

The show itself received mostly poor reviews — and the fact that Adam Levine was shirtless for most of it didn’t help.