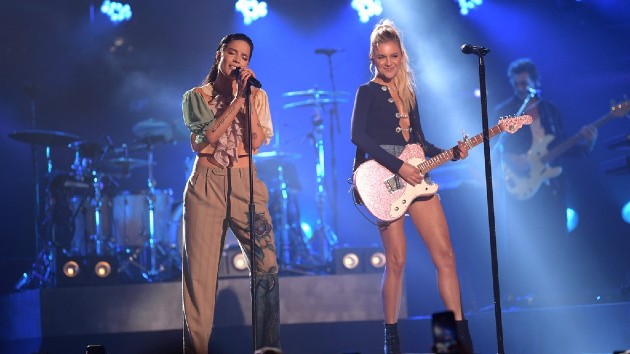 Jason Kempin/CMTHalsey and country star Kelsea Ballerini — the singer featured on The Chainsmokers‘ hit “This Feeling” — have been pals for a while.  In fact, they’ve even sung karaoke together.  But now, we can see them perform on a real stage for the first time, in our first glimpse of their joint episode of CMT Crossroads.

CMT Crossroads pairs rock and pop artists with country stars.  Halsey and Kelsey taped their episode back in October at Nashville’s Ascend Ampitheatre.  Now, the first performance from the show has been released: Halsey and Kelsea team up to sing Halsey’s hit, “Graveyard.”

The entire episode will premiere Wednesday, March 25 at 10 p.m. ET/PT on CMT.

This isn’t the first time we’ve seen Halsey duetting with a country star, of course.  On November’s Country Music Association Awards, she sang “Graveyard” with country trio Lady Antebellum, and also joined them on their hit “What If I Never Get Over You.”