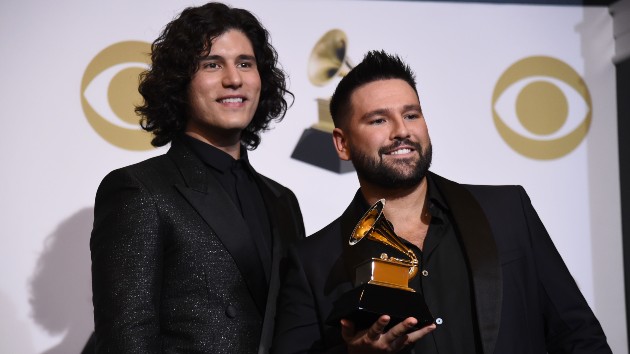 Amanda Edwards/Getty ImagesIt’s not a bad week to be Dan + Shay. The duo and Justin Bieber are currently in the top 10 of the Billboard Hot 100 — and the number-one spot on Billboard‘s Country Airplay chart —  with their hit “10,000 Hours,” and on Sunday, they could claim their second Grammy.

So far, Dan Smyers and Shay Mooney have a perfect record when it comes to the Grammys. Last year, they received their first nomination — and their first win — for their pop/country crossover smash “Tequila.”

This year, the duo nabbed their second and third nominations for “Speechless,” their second pop/country crossover hit. But overall, they say they’re thankful to be recognized on an awards show that celebrates all kinds of music, from pop, rock and jazz to classical, country, metal and Latin.

“The Grammys are such a huge deal,” Dan tells ABC Audio. “It’s an iconic award and it’s an all-genre award[s show], which is really cool for us to be recognized in…and to be able to go out there and represent Nashville.”

Dan also notes that since music industry professionals vote on the Grammys, he says that being acknowledged by his peers feels “really special.”

“We work hard for it…[we’re] thankful for the support of the fans,” he adds. “And to be supported by the industry is special as well.”

Find out if Dan + Shay can preserve their flawless Grammy record Sunday night starting at 8 p.m. ET on CBS.