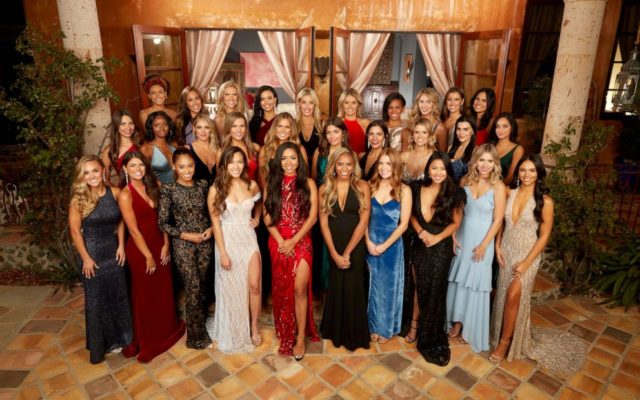 Weber had barely met the 30 women competing for his heart, when Brown — who in turn had her heart broken by Nashville singer-songwriter Jed Wyatt following her season of The Bachelorette — paid a surprise visit to return the pilot’s wings he gave her on their first date with hopes that he would find his true co-pilot.

But is Hannah really over Peter?

Meanwhile, one by one, the ladies arrived at the bachelor mansion hoping to make a memorable first impression, some more over-the-top than others.

Courtney, 26, cosmologist from Venice, Florida had what Peter thought was the “best entrance ever”: guided by air traffic controllers waving paddles, she arrived on a tiny pedal plane.

Deandra, a home care coordinator from Plano, Texas came dressed as a windmill, declaring “Round Five” — a reference to Peter and Hannah’s famous windmill date, in which they allegedly made love four times.

As is customary on night one, the chatter inside the mansion was warm and friendly, until host Chris Harrison brought out the first impression rose, and the ladies each had to angle for as much time with Peter as the others would allow.

Mykenna, a 22-year-old fashion blogger from British Columbia and Natasha, the 31-year-old event planner from New York, kicked off the sniping, followed by Knoxville, Tennessee-based model Hannah Ann, 23, who stole Peter away three times during the cocktail party.  That led to an awkward confrontation between her and Shiann, the 27-year-old administrative assistant from Las Vegas.  Peter was actually impressed by Hannah Ann’s “boldness,” and offered her the first impression rose.

That led to a very emotional first rose ceremony, where Peter said goodbye to eight of the women.

That was followed by a race where the ladies had to complete in a series of challenges.  Kelley won, beating Tammy in the final leg of the competition — riding a pedal plane through an obstacle course.   Proving all is fair in love and war, Kelley, who cheated her way to victory by riding through the cones instead of around them, won a sunset flight over Los Angeles as Peter’s co-pilot and the group date rose – along with a “bunch of targets” on her back.

The first one-on-one date went to Madison, who met with Peter’s entire family and witnessed his parents’ renew their vows after 31 years of marriage.  She also won the date rose, and a live concert from country artist Tenille Arts, who performed her new song “Somebody Like That.”

The date was hosted by none other than Hannah B., who recounted the windmill story, before inviting each of the girls to tell her own personal story about sex, on stage, in front of a live audience.

Backstage, however, we learn that Hannah is secretly jealous of Peter and that he hasn’t completely gotten over her, either.  The episode ends on a cliff-hanger: Will Hannah join the group of women in the Bachelor mansion and continue to date Peter?

Here are the remaining ladies after week one:

The Bachelor continues Monday at 8 p.m. ET on ABC.