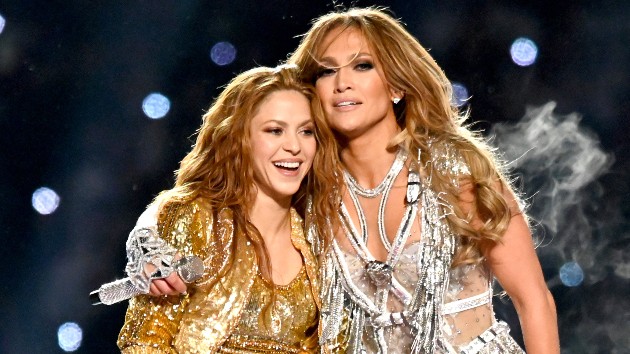 Kevin Mazur/WireImageSuper Bowl halftime performers don’t get paid for performing, but they get paid in other ways — such as increased sales for the songs they performed.

Billboard reports that according to Nielsen Music, all the songs performed during the show by Jennifer Lopez, Shakira and their guests, Bad Bunny and J Balvin, experienced a collective sales bump of more than one thousand percent on Sunday.

More data, including streaming numbers, will be released in the coming days.

Meanwhile, one of JLo’s costumes has garnered some unwanted attention, and not because some felt it was too skimpy.  PETA — People for the Ethical Treatment of Animals — has an issue with the feathered cape she wore that displayed the flags of Puerto Rico and the U.S.

On Instagram, one of JLo’s stylists wrote that the cape was made of “40,000 red, blue, and white feathers all individually sewn in.”  PETA didn’t like that at all, and tweeted, “This flag could have flown without killing birds. Dozens of birds were KILLED for this.”

However, the cape and all of JLo’s outfits were made by Versace, and the label’s official Instagram noted, “All feathers used for the flag were sourced ethically.”