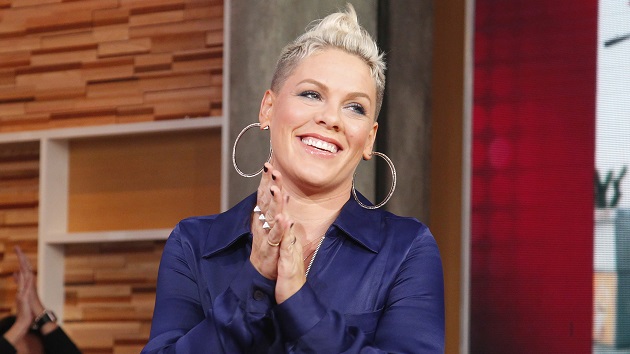 ABC/Lou RoccoIf you needed further proof that Pink and husband Carey Hart are ‘cool parents,’ check out Pink’s latest Instagram post about how they spent quality time with their kids over the weekend.

In a series of adorable Instagram videos, the married couple proudly showed off their eight-year-old daughter Willow mastering her new dirt bike.  In addition, their two-year-old James got a taste for kicking up dirt while taking a spin on the quad with dad.

In the “Walk Me Home” singer’s video, she and Willow get a feel for the path as they ride their dirt bikes in tandem.  “Family ride day,” captions Pink, along with a rock on emoji.

Meanwhile, Hart revealed a little more about his latest family outing in his respective post, including what kind of bikes the girls were on.  “Fun day motoring with the family!” He exclaims. “Willz second day on her 65 and she is doing great! Mama jumped on her 250 and spun some laps while Jamo and I chased on the quad. My kind of Saturday.”

A subsequent video shows the entire family cruising along the dirt path with Willow setting the relaxed pace.

In another post, Hart shows off just how jazzed James is to take a spin on the quad.  The toddler looks almost too excited to be sitting in the driver’s seat, as he is grinning so widely he’s actually squinting.

“This dude is SO amped to ride!!!,” laughs the former motorcycle racer. “Just needs a couple more inches and he will be on a PW.”

While Pink and Hart are definite ‘cool parents,’ they’re also ‘safe parents’ as everyone is suited up with proper helmets and other necessary safety attire.

Pink and Hart celebrated 14 years of marriage earlier this month.