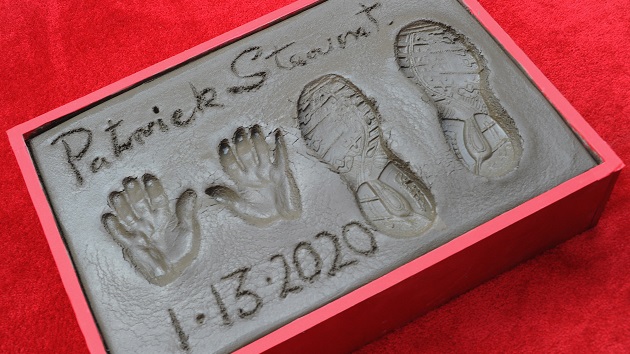 Albert L. Ortega/Getty Images(LOS ANGELES) — On Monday, Sir Patrick Stewart boldly went where Hollywood’s elite have gone before, which is to the TCL Chinese Theatre IMAX in Hollywood, California for his very own hand and footprint ceremony.

He also enclosed a photo of his freshly placed hand, footprints, and elegant signature in the still-wet cement.

ABC News caught up with Stewart at the event, where he emotionally told reporters “It is an extraordinary, exciting honor to be here,” before mischievously joking, “even though it does require me to get my hands and feet a little dirty.”

The 79-year-old, who was wearing a striking cranberry jacket, was all smiles as he pressed his hands into the cement and even obliged reporters when they begged him to “show us your hands” after his print was cast.

The video also revealed that the actor didn’t decide to dirty up a good pair of dress shoes for the important event and opted to wear a simple pair of gray sneakers instead.  Video shows Stewart grinning broadly and shrugging a bit while he stood on the cement and waited for the mold to set in.

The ceremony kicks off the official countdown to Stewart’s highly anticipated new series Star Trek: Picard, which premieres on the streaming service CBS All Access on January 23.  The latest series serves as a continuation of Star Trek: The Next Generation, which ran from 1987 to 1994 but picks up after the tragic events from the 2002 movie, Star Trek: Nemesis.