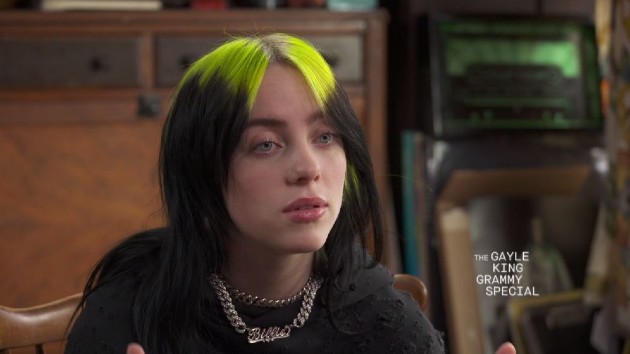 Courtesy CBS NewsBillie Eilish is on top of the world right now: Sunday, she’s up for six Grammys and will be performing on the telecast.  But as the 18-year-old artist revealed Thursday night on CBS’ The Gayle King Grammy Special, it wasn’t that long ago that she was so depressed, she didn’t think she’d make it to age 17.

Billie told King that in 2018, she was “so unhappy…and, like, joyless,” because her extreme fame had made her isolated and lonely. She became clinically depressed, she said, and admitted, “I don’t want to be dark, but I genuinely didn’t think I would make it to 17.”

When asked if she’d considered self-harm, Billie replied, “Yeah. I think about this one time I was in Berlin and I was alone in my hotel…And I remember there was a window right there…I remember crying because I was thinking about how the way that I was going to die was, I was going to do it.”

Billie also revealed that the lyric “I wanna end me” in her song “Bury a Friend” was about herself.

The star says the one thing that kept her from taking her own life was her mother, Maggie Baird, who stepped in to scale back her daughter’s schedule and the number of things she was expected to do.

“We checked in with her all the time about, ‘Do you still want to do this?’” Baird told King. “She loved doing the shows. The fans and the shows, that’s what kept her going.”

Of course, therapy was also involved in Billie’s recovery, as was her family’s support.  She turned 18 last month.