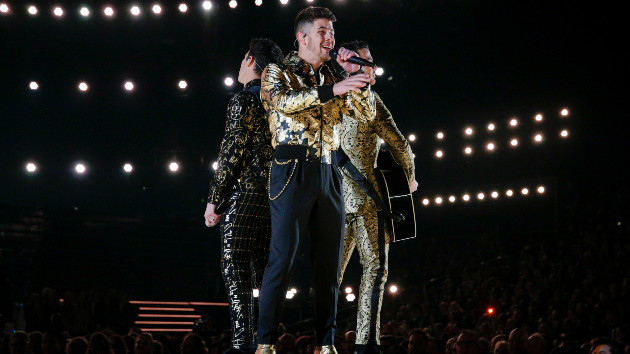 Francis Specker/CBSWhat a man gotta do for some floss or a toothpick? Nick Jonas could’ve used some before his Grammys performance Sunday night.

During the Jonas Brothers set, all fans on social media seemed to notice was that Nick had a piece of food stuck in his teeth.

“Who let @nickjonas on stage at the GRAMMYs with food in his teeth? Someone’s getting fired tonight,” one person tweeted.

While another wrote, “Nick Jonas had food in his teeth during his performance and I think Joe and Kevin purposely didn’t tell him as pay back for breaking up the band years ago.”

Nick found the humor in the situation, though, tweeting shortly after the performance, “So honored to have been back on the GRAMMY stage tonight. At least you all know I eat my greens.”

The Jonas Brothers debuted a new song, “Five More Minutes,” on the Grammys stage before playing their new single “What a Man Gotta Do.” They lost out on the Best Pop Duo/Group Performance trophy to Lil Nas X and Billy Ray Cyrus for “Old Town Road.”