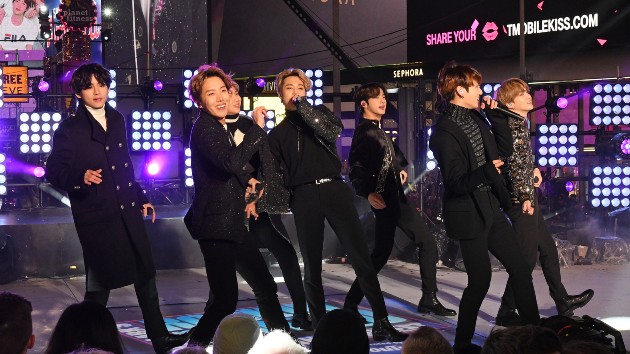 ABC/Lorenzo BevilaquaHappy New Music Friday!  Here’s a roundup of some of the songs that are out now:

— “Black Swan” is the first single from MAP OF THE SOUL : 7, BTS’ new album.  The song’s lyrics are about 95% Korean but, according to a press release, the song is about the group’s “fears that one day music will no longer be able to move or touch them,” as well as the “realization that music is all they have.”

The song comes with an “Art Film” starring the Slovenian modern dance troupe MN Dance Company.  It features the troupe performing an interpretive dance in what looks like an abandoned and destroyed shopping mall. MAP OF THE SOUL : 7 arrives February 21; pre-orders have surpassed just under 3.5 million copies in one week, a record for the K-pop superstars.

— Meghan Trainor has dropped another track from her upcoming album Treat Yourself, due out January 31.  In “Blink,” Meghan warns a guy that he shouldn’t wait too long to make his move, because she’s so awesome.

“Watch out, watch out for me/I’m smarter than you think/I’m crazy but I’m sweet, you’ll see,” Meghan sings. “There ain’t nobody like me, baby/So why don’t we dance?/Don’t miss your chance/Better not blink/’Cause you don’t wanna miss this.”

— Louis Tomlinson has released “Walls,” the title track of his debut solo album, due out January 31.  He says in a statement, “It’s about coming home having been on tour, soon after the band had split. I found some of my girlfriend’s clothes in the cupboard and it hit me what I’d done.”

He adds, “I pretend not to be romantic, but I am. It really hit home when I was in the studio to hear the strings being recorded. There must have been 25 musicians in there, all for my song. It was a proper tear-jerking moment already and I’ve never felt a shiver like it.”