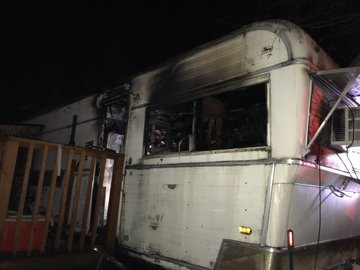 Portland, Ore. – A person is clinging to life after being pulled out of their burning home by Portland Firefighters. When crews arrived at Southeast 107th and Stark early this morning the trailer was fully engulfed in flames. The one victim was rushed to Emanuel’s Burn Center with life threatening injuries. No word on what caused the fire yet.

SE 107th & Stark: Engine 7 is reporting a single wide trailer home fully engulfed in fire, Truck 7 is attempting to search the interior of the trailer home for potential victims, unknown if residents are out. Traffic will be affected in the area #alert @PBOTinfo