Lady Gaga shares first pic from the set of new movie; was dognapping a gang initiation? 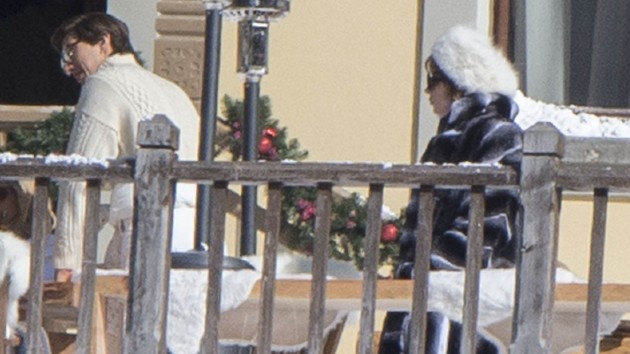 Lady Gaga has shared a photo of herself and co-star Adam Driver in costume in the upcoming film House of Gucci.  As Patrizia Reggiani, Gaga wears a black sweater and slacks, lots of gold jewelry and a fur hat over her brunette hair, while Adam, as Maurizio Gucci, wears a cable knit sweater, ski pants and laughably ’80s-looking eyeglasses.  The two stand together on the balcony of what looks like a ski lodge in the Italian alps.

The movie details how Reggiani was tried and convicted of arranging the 1995 murder of her ex-husband, Maurizio, the former head of the Gucci fashion house.  They were married in the ’80s but he left her for a younger woman. She was released from jail in 2016.  The film is due to be released in November.

In other Lady Gaga news, TMZ speculates that the recent robbery of two of her dogs, which also resulted in the shooting of her dog walker, Ryan Fischer, may have been a gang initiation, rather than an actual robbery.  TMZ notes that video of the incident shows it was unnecessary for the dognappers to have shot Fischer, since he wasn’t near the dogs at the time, but the perpetrators so did anyway.

Meanwhile, TMZ reports that Gaga has yet to pay the $500,000 reward she offered to the woman who returned the dogs safe and sound, because police haven’t determined whether or not the woman was connected to the crime.  Police have advised the singer not to pay until they’ve cleared the woman.

The Best Ice Cream in Every State