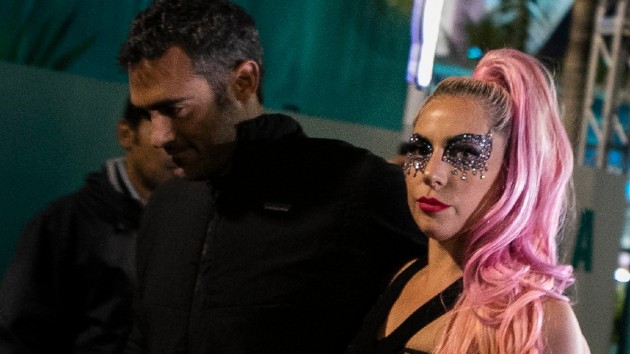 EVA MARIE UZCATEGUI/AFP via Getty ImagesLess than 48 hours after Lady Gaga‘s latest boyfriend was identified as entrepreneur and investor Michael Polansky, she’s made the relationship Instagram official with a PDA-packed picture.

In the photo, Gaga is on a boat, wearing a blue bikini with a black mesh cover-up. She’s sitting on Polansky’s lap with her arms around his neck; he has one arm around her back and the other on her thigh.

“We had so much fun in Miami. Love to all my little monsters and fans, you’re the best!” she captioned the snap.

Gaga gave a full-blown concert in Miami over the weekend as part of the pre-Super Bowl event AT&T TV Super Saturday Night — it was live streamed on Twitter, and you can now watch it online.

According to Page Six, Polansky was spotted watching Gaga’s Saturday night concert from the VIP balcony; they were also seen kissing on the balcony of the mansion Gaga rented in Miami.

Polansky is the CEO of the San Francisco-based Parker Group, an organization that runs Facebook co-founder Sean Parker‘s various charitable and business initiatives.  The two were first seen together in Las Vegas over New Year’s Eve.

In addition to performing and cuddling with Polansky in Miami, Gaga also watched the halftime show, which she headlined in 2017, and tweeted her approval of “beautiful sexy talented women” Shakira and Jennifer Lopez.