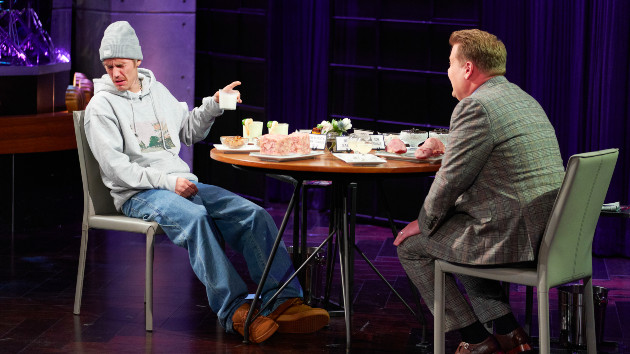 Terence Patrick/CBS ©2020 CBS Broadcasting, Inc. All Rights ReservedOn the third night of his Late Late Show takeover Thursday, Justin Bieber played a not so yummy game of “Spill Your Guts or Fill Your Guts” with host James Corden.

During the course of the game, the two had to either answer tough questions or eat gross foods including bird saliva and bull penis. Justin went first and asked Corden who he thought was more talented: Justin or Harry Styles. Corden took the shot of bird saliva.

Justin was then forced to take a shot of a shrimp and chili pepper smoothie rather than answer which country has the worst fans.

Also during the game, Corden was asked how much he regrets doing Cats on a scale of 1-10 and he answered, “4.5.” Justin was also asked to rank his wife Hailey’s model friends from favorite to least favorite. He actually answered that one, putting Kendall Jenner first because he knows her the best, followed by Gigi Hadid and Cara Delevingne.

“I have nothing against those people,” Justin said. “[And] I don’t want to eat a bull’s penis.”

This week on The Late Late Show, Justin also did “Carpool Karaoke” and “Toddlerography” segments with Corden.