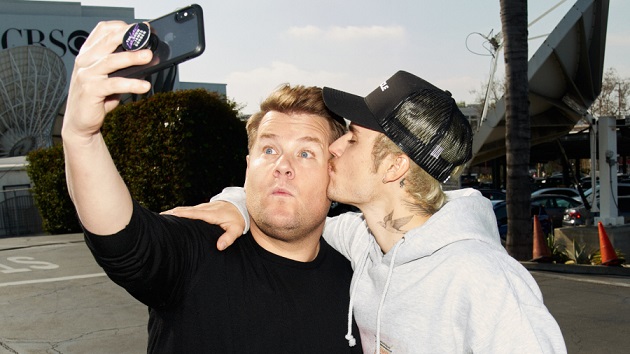 They duo belted out a number of the pop star’s hits as they drove* along, including his most recent singles “Yummy” and “Intentions,” as well as, his songs “Love Yourself” and “I Don’t Care.”

At one point, Corden asked Bieber what possessed him to challenge Tom Cruise to a fight in June 2019.

The 25-year-old simply chalked it up to being stupid, before the two debated who would have won had it actually happened.

Corden put his money on the Mission Impossible actor which led to a hilarious arm wrestling competition between the talk show host and Bieber. (Spoiler alert: Bieber won.)

The “Yummy” singer also chatted about married life and what he and wife, Hailey Bieber like to do. As it turns out, they are just like the average couple and like to binge watch television with the iconic sitcom Friends being included on their list of shows.

Bieber and Corden capped off their trip by singing “One Less Lonely Girl,” which he sang at his wedding.

*Should be noted that Corden was infamously busted while recording this segment after a fan caught him and Bieber being towed around the city instead of driving.  Corden came clean in January that it was due to safety reasons.