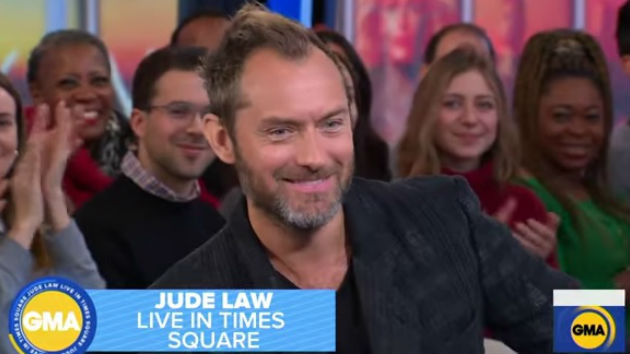 ABC(NEW YORK) — Jude Law plays a former M:I6 agent in the new thriller The Rhythm Section, in which he trains Blake Lively’s character, who is hellbent on avenging a family tragedy.

The actor explains that director Reed Morano pulled no punches, literally, choosing to stage a brutal fight sequence between his and Lively’s character in one take. “And that is not easy, I tell you,” Law explained on ABC’s Good Morning America Wednesday. “We rehearsed it for weeks and weeks.”

“Fight scenes are [usually] broken up. That’s how you either slip in the stunt person or slip in this sort of fake fake punch,” said Law.

For The Rhythm Section, the actor notes, “The fact is, we were in there. We were doing it for real.”

That had its consequences for Lively. “She broke her hand on my chest,” Law said with a smile. “That’s all I’ll say.”

Speaking of breaking, but in a different capacity, Law proudly talked about his eldest son, 23-year-old Rafferty Law, breaking into the entertainment business.

“He’s in a band, a great band called Outer Stella Overdrive,” Law said, laughing about getting in a plug for the group. He added, “He’s just played the lead in a in his first film…a modern retelling of Oliver Twist.”

So did the accomplished actor have any advice for his son? He doesn’t need it, Jude says, adding, “He’s so smart and sensible and beautiful.”