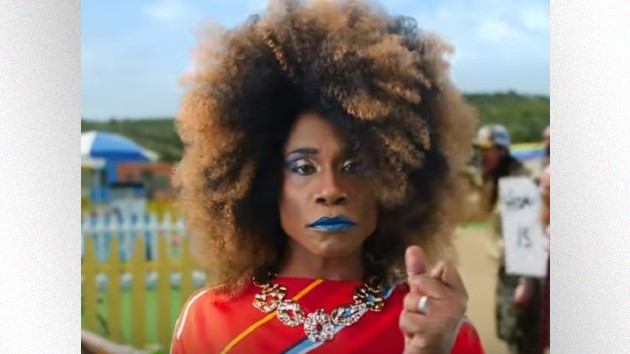 TAS Rights ManagementWith her song “You Need to Calm Down” and its accompanying video, Taylor Swift took a very public stand for LGBTQ rights and this week, it was announced that she’d be honored at the 31st Annual GLAAD Media Awards with the Vanguard Award.  One of the many LGBTQ celebrities who appear in the video, Emmy-winning actor and singer Billy Porter, tells ABC Audio that he was glad Taylor reached out to “Grandpa.”

He adds that Taylor told him, “I need the help from the people who know how to do it. And that’s why I’m calling you.”

In the video, Billy ended up illustrating the lyric “Can you just not/step on his gown?”  He jokes that since he’s older than the other guest stars in the video — like Adam Lambert, Jesse Tyler Ferguson, Adam Rippon and the Queer Eye guys — Taylor’s invitation means that she “called Grandpa.”

“I said, ‘Well, thanks for calling Grandpa and pulling me out of the doldrums of…music industry obscurity!’” he laughs. “Y’know, I like hanging out with the kids!”

In addition to the exposure, Billy also got an award for his trouble: Because “You Need to Calm Down” was named Video of the Year at the MTV VMAs, Taylor made sure everyone received a trophy.

The GLAAD Media Awards take place in March and April in New York and L.A.