High Water In Scappoose And Many Other Parts Of Metro Area

Scappoose, Ore. – Heavy rain on top of snowfall during the weekend caused flooding in several areas of Columbia County.

Several homes are dealing with several inches of water inside.

The Gaston, Scappoose Yamhill Carlton school districts announced they were releasing students early to make it home around flooded roads.

Our news partner KGW reports the mayor of Rainier, Jerry Cole, declared a state of emergency to secure all available funds to repair damage to the city with the flooding that began at 3 a.m.

There was “extensive damage” public and private properties, he said in the declaration.

There were problems in Washington state as well.  WSP Trooper Will Finn captured video of flooding in Kalama.

Kalama – NB I5/Exit 30 – CLOSED! A motorist attempted to drive through the deep water. Not advised! Doesn’t look like this will be cleaned up anytime soon! pic.twitter.com/2gWGOENsR9

Deputies patrolling Highway 30 saw what can only be described as a waterfall near the road.

Water is flowing across the highway. 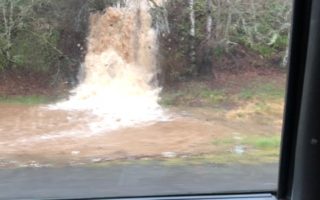 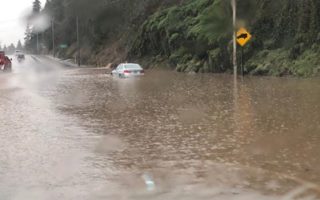