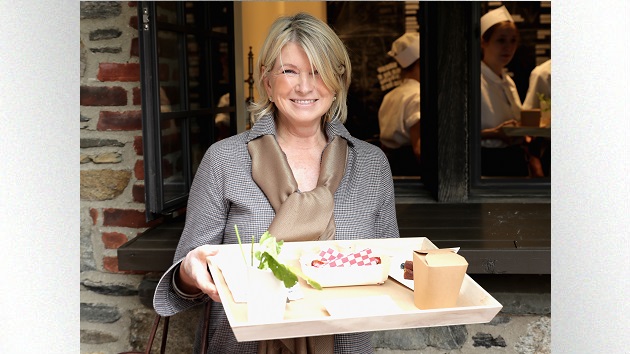 Neilson Barnard/Getty Images for New York Times(BEDFORD, Connecticut) — A good chunk of Americans had to shovel a sizable amount of heavy snow over the weekend.  One of those Americans buried under six inches of thick snow was no one other than Martha Stewart.

However, instead of hiring a team of professionals to do the laborious task of shoveling and plowing, the TV personality took it upon herself to clear her property.

“After a beautiful but cold snowstorm my farm was covered with four to six inches of moderately heavy snow,” the 78-year-old cheerfully wrote on Instagram Sunday.

So, how much snow did she have to move?  “Got up early to plow the four miles of [sic] roads on the farm,” revealed Stewart alongside a series of videos of her happily bustling around and clearing away the compacted snow like a champ.  “I plowed non stop for two and a half hours and I think I did a great job!”

Luckily, the businesswoman had a little help with her Polaris UTV, in which she gratefully shouts out for allowing her to manicure her trails just the way she likes, which explains why she spent nearly three hours making sure the roads were just right.

“I don’t like to damage the defined crown of my carriage roads, nor do I like to disturb the gravel topping,” Stewart explains before jumping into the nitty-gritty of her routine, “So I plow leaving an inch or two of snow cover. Looks prettier and I can use the roads for horseback riding as well as cross country skiing.”

That said, the next time you rue the day you have to shovel the driveway or porch, just know 78-year-old Martha Stewart is out there somewhere spending a minimum of two and a half hours plowing about four miles of roads.