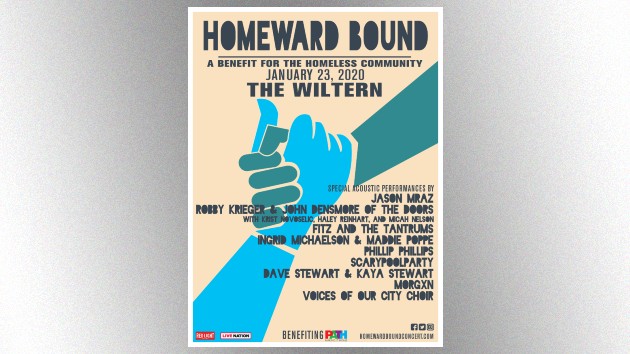 Courtesy Homeward BoundTonight in L.A., Homeward Bound, an all-star acoustic benefit concert, will raise money for the city’s homeless.  The eclectic lineup features Jason Mraz, Ingrid Michaelson, Fitz & the Tantrums, members of The Doors and Nirvana, and American Idol champs Phillip Phillips and Maddie Poppe.  Maddie tells ABC Audio her dad was psyched to attend…but not to see her.

“He was like, ‘Maybe I should come to the Homeward Bound concert because I really want to see The Doors!’” she laughs. “So he’s a huge fan. He thought it was super cool that I’ll get to meet them and just be in the same lineup as them…y’know, they’re legendary.”

Maddie herself is most excited about reuniting with Ingrid Michaelson, who she toured with last year. They plan to perform solo and together tonight.

“It’ll be so good to see her again,” she tells ABC Audio. “I’m just honored that I actually get the chance to be around her.”

100% of the proceeds will go to PATH, an organization that works to help get families off the street.

“I wanted to be involved in this because I think it’s so important to use your platform to give back as often as you possibly can,” Maddie notes. “I think this is such a great cause and I’ve not really been a part of something like this ever.”

In addition to the concert, Maddie also had another major event this week: Her two-year anniversary with Caleb Lee Hutchinson, who was the runner-up the year she won American Idol.

“We met, I think…the first or second day of Hollywood Week…but we just kind of say it’s the 21st because that’s when Hollywood Week started,” she explains.  “So, yeah, two years…and it’s going so good!”