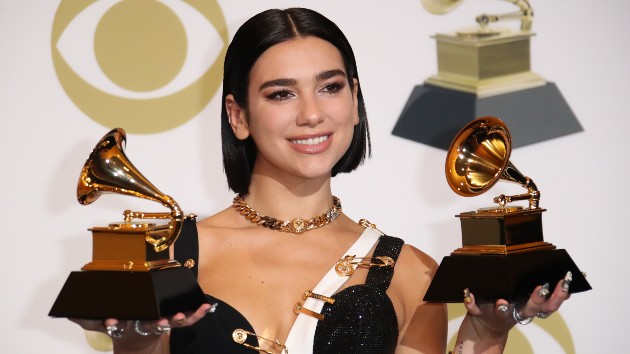 Dan MacMedan/Getty ImagesThe 62nd Annual Grammy Awards take place this Sunday night in Los Angeles.   Last year, Dua Lipa was named Best New Artist.  This year’s nominees include Billie Eilish, Lil Nas X and Lizzo. So what’s her advice for the artist who takes home the award on Sunday?  She tells ABC Audio that you shouldn’t let the expectations that come with a Grammy win keep you from making your art.

“You know, people are always going to tell you that there’s gonna be a lot of pressure with that,” she cautions. speaking with ABC Audio. “I think as long as you make things that you’re proud of, you know, no matter what, you’re always going to grow in the way that you want to as an artist. And I think that’s always something that’s important to remember.”

She adds, “I think that the second album pressure that people tell you about, I think you have to bypass that.”

Dua knows what she’s talking about:  She’s about to release her second album, Future Nostalgia, and it’ll be her first release after her Grammy wins.  Yes, wins, plural: She also won the Grammy for Best Dance Recording last year for her Silk City collabo “Electricity.”

The singer, who’s spoken out about female empowerment from a variety of award show stages, says she’s pleased that the artists who have the most nominations going into this Sunday’s telecast are female.

“It’s amazing to just see so many women nominated this year!” she gushes. “So I’m super-excited and super happy for them.”