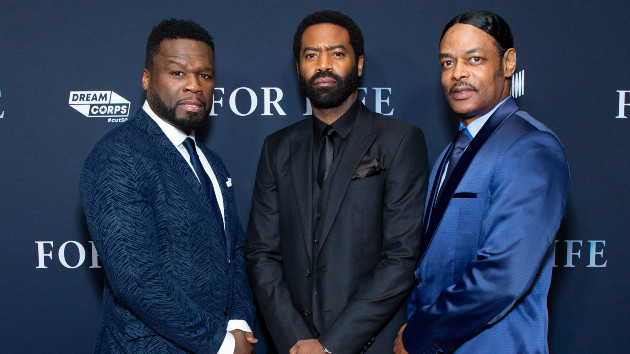 L-R, Jackson, Pinnock, Wright — ABC/Arturo Holmes(NEW YORK) — Tonight, ABC premiers the new legal drama For Life, inspired by the true story of Isaac Wright Jr., a wrongfully imprisoned man, who, while incarcerated becomes a licensed attorney and steps in as a legal defense for his fellow inmates.

Curtis “50 Cent” Jackson, who serves as executive producer on the series, says that when Wright told him about his journey and eventual exoneration, he immediately knew it should made into a series.

“I felt like that two hours wouldn’t do [his] story justice,” Jackson told ABC Audio. “I said, ‘Nah it’s a TV show.’”

Wright, who says he was content with the “most important parts of [his] story [being] told,” confirms 50 was the one who envisioned the series, adding, “this is something that people are going to want to hear and see every week.”

50 also had a vision for the show’s cast. Joy Bryant, who plays the estranged wife of the wrongly imprisoned Aaron Wallace, had previously starred alongside 50 in his 2005 loosely based biopic, Get Rich or Die Tryin’. Bryant says working with 50 again was definitely a “no brainer.”

“I’m very proud of how far he’s come and he’s killing it,” Bryant says of 50. “I think the fact that he recognized this amazing story and felt the need to help bring it to the world is extraordinary and a testament to his growth as not just an actor, really, but as a producer and a content creator.”

“Even if you haven’t been through any of these things any of these people have been through, there are strands of loss, injustice, fighting for something that you can identify with,” he says.