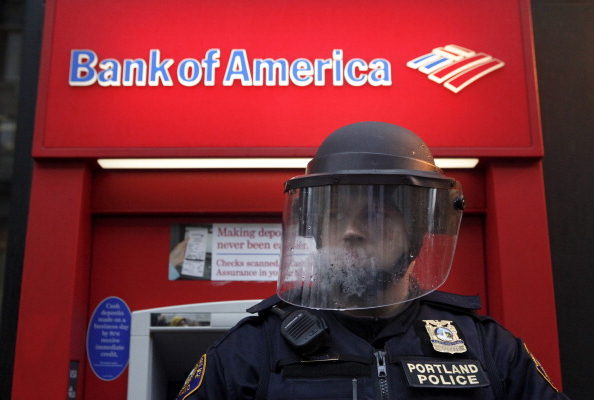 Protesters broke into the police headquarters in Portland, Oregon, Friday night and authorities said they lit a fire inside as a rally over the death of George Floyd in Minneapolis turned violent.

Blazes continued to burn early Saturday morning in multiple locations in downtown, including a building that housed a bank.

Police via Twitter labeled the event a riot before midnight and closed several streets. They said two people had been arrested in connection with the overnight disturbance and another person was arrested Friday afternoon.

“All persons in downtown Portland: it is not safe, it is dangerous, there is rioting, leave now.”

Portland police said at least one shooting was tied to the protest, although details weren’t immediately released. A fire built from cardboard boxes and other items burned in the middle of a street downtown and video appeared to show dozens of people breaking into Pioneer Place mall and taking bags from a Louis Vuitton store. Police said they deployed gas after people threw projectiles at them. Firefighters were responding to the fires, police said.

Earlier, thousands of people filled Peninsula Park in North Portland for a peaceful evening vigil that lasted three hours, The Oregonian/OregonLive reported. Hundreds then began marching through downtown to Portland police headquarters outside the Multnomah County Justice Center. There was scattered vandalism along the route.

Portland Mayor Ted Wheeler tweeted a plea to protesters to remain peaceful and said at about 11:50 p.m. that while he had left Portland to attend to his dying mother, he was heading back to the city.

“I am with family to prepare for her final moments. This is hard, this is personal, but so is watching my city get destroyed. I’m coming back NOW,” he said, adding that police and community leaders would be hearing from him.