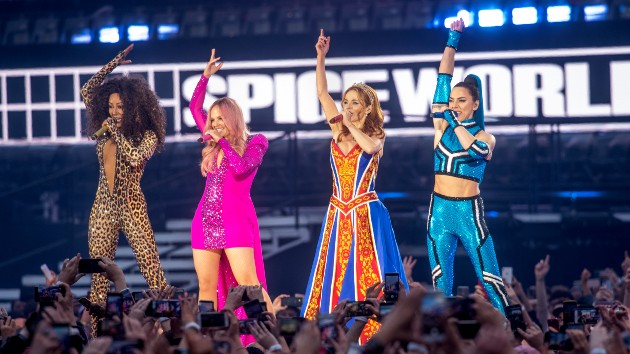 Dave J Hogan/Getty ImagesIn 2019, The Spice Girls reunited for an extremely successful and extremely lucrative tour of U.K. stadiums, which attracted nearly 700,000 fans, including stars like Adele.  But will the foursome — who performed minus Posh Spice — bring their Girl Power to the U.S. in 2020?  Apparently, nobody knows.

Richard Griffiths, one of the group’s managers, tells Music Week, “Our deal with them was just to do one tour. There’s been a huge amount of interest from absolutely everywhere. But getting the timing right for them to do something again, that will take some juggling around to make that happen…Going away to America for two months doesn’t necessarily work for everybody.”

Execs involved with the tour, which grossed just over $78 million, tell Music Week that extending the tour is an “ongoing conversation,” but Griffiths admits, “Whether we’d be working with them again, whether they themselves would be working again, none of us know.”

Still, when there’s money to be made, there’s always the possibility of more dates.  An executive at London’s Wembley Stadium, where the tour closed out with three shows, tells Music Week, “I’m not sure we have ever seen demand backed up so high on the ticket platforms for an event here before.”

He adds, “The girl power message still remains current and relevant to many.”

This past October, The Spice Girls re-signed with their talent agency, which would seem to indicate that they plan to be active at some point in the future.