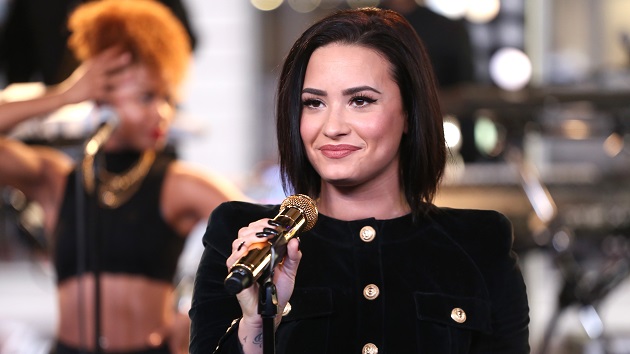 ABC/Fred LeeDemi Lovato shrugged off the makeup and treated fans to a surprise bare faced selfie on Monday.

The 27-year-old became re-inspired by the #MakeupFreeMonday hashtag and decided that it was the perfect time for fans to see what the real Demi looks like.

“Haven’t done a #NoMakeupMonday in yearssss but I figured after posting so many glamorous pics with tons of makeup and hair pieces, it’s important to show myself underneath it all,” the “Anyone” singer cheerfully captions against a stunning selfie with her hair slicked back, so she has nothing to hide behind.

“This is what I look like 85%-90% of the time,” Lovato continued with her self affirmation.  “Proud of my freckles, proud of booty chin and proud of myself for loving and accepting myself the way I am.”

She ended her caption with another healthy dose of self love by using the hashtag #ILoveMe.

Fans and friends were also feeling the love in the comments’ section, as they flooded the “Confident” singer with praise.  Most were quick to hone in on Demi’s rarely seen natural freckles and naturally long lashes.

Lovato recently opened up about her struggles with self acceptance, most recently in Graham’s podcast, Pretty Big Deal — where she revealed that an unresolved eating disorder led to her terrifying overdose in 2018.

She spoke about how those around her constantly telling her she had to look a certain way caused her to relapse.

Now, Lovato is gearing up for her next chapter with brand new music and a new era of being honest and kind to herself.