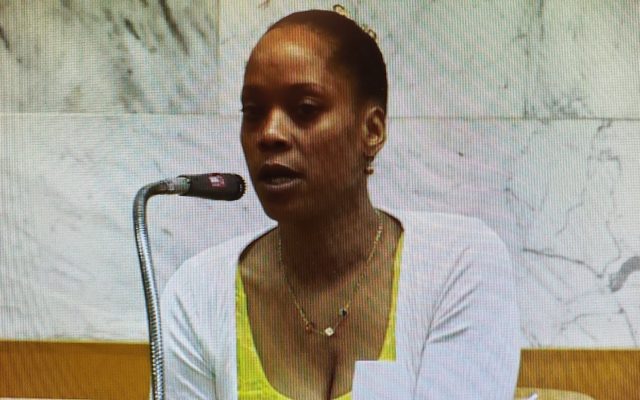 PORTLAND, Ore.– The double murder trial of Jeremy Christian, who is accused of stabbing three people on a MAX train nearly three years ago, continued into its fourth day Friday.Christian is accused of stabbing and killing two men – Ricky  Best, 53, of Happy Valley, and Taliesin  Namkai Meche, 23, of Portland – on a MAX train in northeast Portland in May 2017. A third victim, Micah  Fletcher, survived the attack .The first witness on Friday was Demetria Hester. Christian is accused of verbally assaulting and throwing a Gatorade bottle at Hester on a MAX train the day prior to the stabbings.Hester told the jury she was on the MAX train at around 10:30 p.m. the day before the stabbings and was on her way home.

During the ride to the Rose Quarter stop, where she switched trains, Hester said Christian walked on. She said she immediately noticed his presence on board because he started going on a racist rant.Eventually, Hester said she told him to “shut up, no one wants to be threatened because of their race, color, creed or religion.” That’s when Hester claims he began targeting her.Video from the MAX train was played in court. It showed Christian turning around multiple times to yell at Hester.Hester says she knocked on the conductor’s door multiple times, but she never got a response. She also said no one else responded to Christian.According to Hester, Christian verbally threatened her at least five times that he was going to kill her and called her a “b****” more than 10 times.Both Hester and Christian got off at the same platform.. “I Maced him as I saw him putting his bag down, and when I was coming further to him, he threw the Gatorade bottle at my right eye.”

Hester says the liquid inside the bottle got all over her, even in her mouth. She said it tasted like alcohol. the Gatorade bottle was half full with Sangria.Photos of Hester’s black eye were shown in court. Hester told the jury that the swelling lasted about a month. She also says she’s having vision problems with that eye