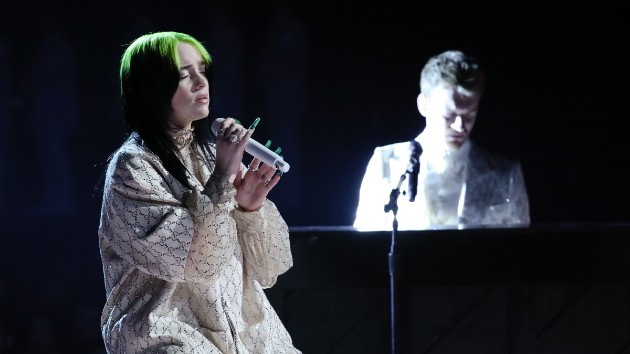 Monty Brinton/CBSNow that Billie Eilish has won all the Grammys, everyone wants to know when we can expect new music from her.  But she’s reluctant to go on record about just how much work she’s done on the follow-up to WHEN WE ALL FALL ASLEEP, WHERE DO WE GO?

Speaking to Billboard at the Grammys, Billie said in the coming months, she’ll release one-off singles “if I have them,” but cautions, “I don’t really know what’s coming. I’m kinda just like doing what I feel and while doing that, thinking about making an album.  But it’s not done at all — it’s like, a couple songs, maybe. Maybe not.”

The record-breaking singer also talked about her upcoming Apple TV+ documentary, and said she plans to watch it before it launches, noting, “I better get some say in what’s in it and what’s not! Dude, they have filmed some stuff that I’m like, ‘Please don’t put that in there’ — like, just me being annoying or whatever. But yeah, I’ll watch it. I’ll watch it, for sure. I’m excited.”

Billie also said that even though we think we know a lot about her, we’ll still learn “hella s**t” by watching the doc.

As for her 2020 goals, Billie says above all things, she wants to be present.

“I realized a couple months ago that I’m in the period of my life that I’m gonna miss, I think,” she said. “Life is kinda perfect for me right now, to be honest with you, and I feel like I can say that now because it wasn’t for a really long time…and now I’m not lying.”