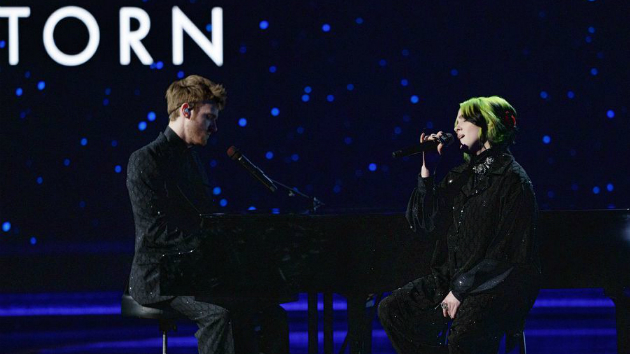 ABC/Craig SjodinBillie Eilish was not a fan of her Oscars performance.

During an interview with Zane Lowe on Apple Music, the “bad guy” singer reveals that she was sick during the ceremony, during which she and her brother Finneas covered the Beatles classic “Yesterday” for the In Memoriam segment.

“I bombed that…performance,” Eilish says. “That was trash.”

Comparing her Oscars performance to her set at the Grammys, Eilish says she was much more comfortable at the music awards show.

“The Oscars is not my people, I’m not used to that,” she explains. “At least the Grammys wasn’t as scary because it was, like, artists. It felt like my people, it felt like…’Oh, look, a bunch of artists!’ And I knew a lot of them already and I’d met them and they knew of me.”

“But the Oscars, I’m, like, ‘These are movie stars!’” Eilish laughs.

Lowe, for his part, did not agree with Eilish’s assessment of her performance.

Also during the interview, Eilish discusses her new James Bond song “No Time to Die,” which dropped Thursday night.

“[Finneas and I] got a piece of the script…the first scene, and then we wrote the song immediately,” she says. “We wrote it in three days. We wrote it in Texas and we recorded it in a bunk on the bus, in a basement in the dark.”

Eilish, who’s the youngest artist ever to write and record a Bond theme, will perform “No Time to Die” alongside Hans Zimmer and Johnny Marr — who composed the movie’s score — at the 2020 Brit Awards, taking place February 18 in London.

No Time to Die the film hits U.S. theaters on April 10.