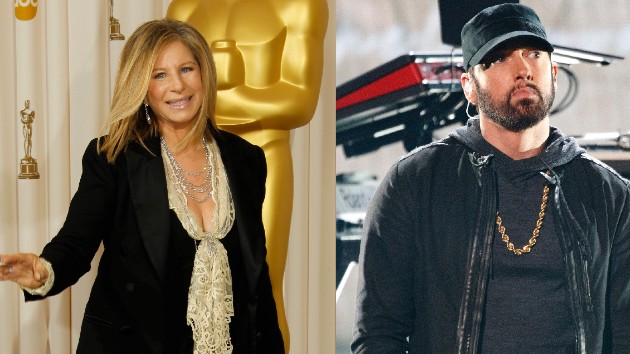 Streisand: Dan MacMedan/WireImage; Eminem: ABC/Craig SjodinAt the Oscars in 2003, Barbra Streisand announced that Eminem had won the Best Original Song trophy for his song “Lose Yourself.”  The rapper didn’t show up to collect his prize that night, though, depriving us of the opportunity to see Streisand hand him a trophy.  That’s why Barbra says she was so happy to see the superstar rapper’s surprise performance on the Oscar telecast on Sunday.

After he performed “Lose Yourself,” Eminem posted a video of Barbra announcing his award that night in 2003 and captioned it, “Thanks for having me @theacademy. Sorry it took me 18 years to get here.”

Barbra reposted Eminem’s post to her Instagram, and captioned it, “I had voted for your song too! Was really looking forward to handing you the award. Next time!” She added a winking emoji.

Eminem recently told Yahoo Entertainment that he skipped the ceremony the first time around because he didn’t think he had a chance of winning, and because he had just performed “Lose Yourself” on the Grammys a few weeks before.

In addition, he admitted, “The younger me didn’t really feel like a show like that would understand me.”

He also said it “would have been crazy” to accept an Oscar from Streisand on that night.  “That to me shows how authentic and real that award is — when you don’t show up and you still win. That makes it very real to me,” he said.

The rapper also denied reports that he refused to perform “Lose Yourself” on the Oscars because the Academy insisted he censor the song.

“Oh no, that wasn’t the case at all, because there’s not even that many cuss words in it — there’s only a couple,” he said.