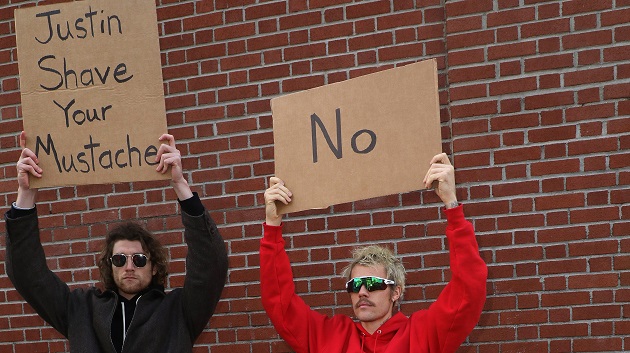 Pierre Suu/GC ImagesAfter insisting that his much reviled mustache was here to stay, Justin Bieber bid farewell to his facial hair on Sunday.

“I shaved,” the 25-year-old declared on Instagram against a rather grumpy looking clean-shaven selfie of, as he called it, “Baby face BIEB.”

However, it appears this silky smooth look won’t be here to stay as the singer also promised in the caption, “MUSTASHIO went on holiday, but he will be back in due time.”

Bieber also treated fans to an Instagram stories montage on Sunday of him taking an electric razor to his mustache, setting the shave job to a fitting soundtrack consisting of tunes “Miss You” by Rolling Stones, “Since U Been Gone,” by Kelly Clarkson, “Gone” by *NSYNC, and Ray Charles‘ “Hit the Road Jack.”

So, while the “Yummy” singer is looking forward to being reunited with “MUSTASHIO” in the future, fans and friends are delighted to see a smooth-faced Bieber again. However, it seems that no one is more overjoyed by the news than his family.

Wife Hailey Baldwin commented with a delighted “yeeeeee” and a heart eyed emoji while his mom Pattie Mallette celebrated with a succinct, “Ya praise God.”

On the other hand, some people are already missing Bieber’s shaggy look, as seen by producer Scooter Braun comically demanding in the comments, “Where the hell is ricardo mustachio?? What have you done with him???”

Bieber dropped his fifth studio album Changes on Valentine’s Day. According to Billboard, the album is poised to debut atop the Billboard 200 chart, which could become his seventh number one overall.