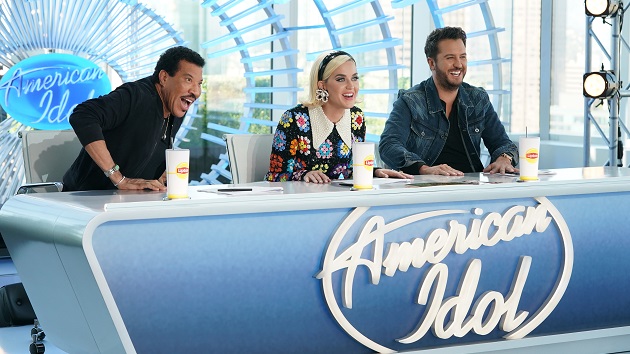 It’s week three of American Idol and the judges — Katy Perry, Lionel Richie, and Luke Bryan — are still scouring the United States for the next singing sensation.

First up, setting the bar high for the auditions is 17-year-old Kimmy Gabriela from Lakeland, Florida who stopped by the Savannah, Ga. auditions. The Dominican and Venezuelan singer impresses the judges with her cover of “Let’s Hurt Tonight” by One Republic before she’s asked to sing a snippet of something in Spanish, which only increases the judges interest. Amazed by Kimmy’s vocal abilities, Katy utters “Top Ten” before the judges unanimously vote to push her through to Hollywood.

One of the other locations where the judges weeded through talent was in Los Angeles, more specifically, the building where Katy became engaged to actor Orlando Bloom. She’s not the only one though, after the judges let contestant Jordan Jones through to Hollywood, he gets down on one knee and proposes to his girlfriend.

“This room is blessed,” Katy yelps in excitement.

Next up, a familiar face accompanies in singer and songwriter, Lauren Mascitti to her audition — her fiancé country musician Shawn Camp, who Luke recognizes right away. Getting back to Lauren, she woos everyone in the room with an original song. While Luke and Katy deliver some words of advice to Lauren to make the audience melt like butter, Lionel replies, “I’ve melted already,” as he delivers the final “yes” and sends her through to the next round.

The real tear-jerker moment, because you know there had to be one, comes with American Idol hopeful Courtney Timmons, who, after finding out that the auditions were not an open call, waited outside all day just for a chance to get a sneak peek at the judges. She ends up with more than just a sneak peek thought when Ryan Seacrest comes to the rescue and brings her in. The judges, taken aback at first by the spontaneity what’s happening, are pleasantly surprised when she nails Andra Day‘s “Rise Up,” prompting Katy to say she’s “one of the best singers” they’ve seen all day. Needless to say, Courtney gets a ticket to Hollywood  — a magical moment which brings Katy and Ryan to tears as she was originally denied the opportunity to audition.

In another feel good moment, 23-year-old DeWayne Crocker, Jr. wins over Luke and Lionel with his rendition of “Don’t Worry Be Happy” by Bobby McFerrin, but it’s his elder family member who steals the show. Crocker’s 78-year-old great-grandmother comes in rocking a leopard print dress and six-inch heels to dance with Lionel as he sings “Lady.”

Of course, it wouldn’t be American Idol if there weren’t a few auditions that left the judges somewhat baffled. Enter Jared Lettow, not to be confused with the actor Jared Leto, who garners some blank stares and twitching eyes from the judges with his mixture of singing and yodeling. Although he successfully teaches Katy how to yodel, he wasn’t successful in making it through to Hollywood.

Closing out the show is returning American Idol contestant Genavieve Linkowski. Unfortunately, her return comes with some bad news. She informs the judges that since they’ve seen her last her sister passed away — cue some more tears. As she belts out Michael Bolton‘s “How Am I Supposed To Live Without You” the judges not only feel her pain and hurt come through but they notice she’s grown as a performer ultimately earning her another trip to Hollywood.